We advise caution when travelling to Ethiopia

We advise caution when travelling to Ethiopia. We detected travel advisories from 7 sources for this specific country.

Ethiopia shares a land border with 5 neighbouring states. For this region of countries (including Ethiopia), the Advisory Index is 3.3 (average value over all countries). All countries have some reported advisories: Somalia (5), Sudan (3.9), Eritrea (3.3), Kenya with 2.6 and Djibouti with 2.2 (of 5).

Chart of the risk level over that last 200 days. This is the daily calculated travel risk for Ethiopia.

Chart of the number of sources over that last 200 days. This is the daily number of advisory sources (of any rating) that have been active on that day.

Note: Changes happening on the 28th/29th of July 2019 are related to a change in the software and number of sources processed.

These are the individual advisories published by other countries about the destination Ethiopia from a travellers perspective. The scoring of all messages combined is the foundation for the current rating 2.6 out of 5.0.

Exercise increased caution when traveling in Ethiopia due to sporadic civil unrest and communications disruptions. Some areas have increased risk. Read the entire Travel Advisory. Do Not Travel To: Border area with Somalia due to potential for terrorism, kidnapping, and landmines. Border areas with Kenya, Sudan, South Sudan, and Eritrea due to crime, ...

The Canadian goverment suggests: Exercise a high degree of caution (with regional advisories)

Exercise increased caution elsewhere in Ethiopia, including Addis Ababa, due to violent crime, the threat of terrorism and the unpredictable security situation.

Info: Avoid non-essential travel to the Danakil desert area (east of the Dessie-Adigrat road and north of the Dessie-Djibouti road).  There is a significant threat to your security in these areas due to cross border tensions, the activities of armed militant groups, the risk of kidnapping and armed banditry, and the presence of landmines.

Info: Do not travel within 10 kilometers of Ethiopia's borders with Somalia, Kenya, South Sudan, Sudan and Eritrea, with the exception of Highway 80 and the Moyale border crossing along the Kenyan border. Ethiopian Prime Minister Abiy’s peace overtures to Eritrea from June 2018 have resulted in the border between Ethiopia and Eritrea being reopened, although it remains a militarised zone pending withdrawal of forces. Do not travel to most parts of the Somali region, specifically the Nogob (previously Fik), Jarar (previously Degehabur), Shabelle (previously Gode), Korahe and Dollo (previously Warder) zones and within 100 kilometres of the border with Somalia in the Afder and Liben zones. Do not travel to certain parts of the Gambella region (the districts of Akobo, Wantawo, Jikawo and Lare in the Nuer zone and Jore district in the Agnuak zone).

This is the recent history of individual changes of travel advices that affected the total asessment of Ethiopia. Most recent events first.

The total rating for Ethiopia changed from 0.0 to 0.0. Here are the influencing details:

The United States government issued a new warning for Ethiopia with a rating of 2.0.

The Austrian government issued a new warning for Ethiopia with a rating of 3.0.

The Canadian government issued a new warning for Ethiopia with a rating of 2.0.

The New Zealand government issued a new warning for Ethiopia with a rating of 2.0.

The Irish government issued a new warning for Ethiopia with a rating of 3.0.

The Finnish government issued a new warning for Ethiopia with a rating of 3.0.

The Danish government issued a new warning for Ethiopia with a rating of 3.0.

Ethiopia with its capital Addis Ababa is a country in Africa (Eastern Africa), slightly less than twice the size of Texas (1,127,127 km²). The country is located Eastern Africa, west of Somalia. The climate can be described as tropical monsoon with wide topographic-induced variation. The landscape is high plateau with central mountain range divided by Great Rift Valley. With a population of about 78.25 million citizens. 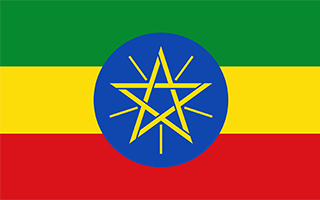 These are problems Ethiopia is facing. Environmental issues refer to damages of the nature due to industry and society. Natural hazzards refer to potential dangers originating in nature.

These are the main product industries and agricultural products of Ethiopia. This list indicates what this country is good at producing.

These are the main product categories of imports and exports to and from Ethiopia.

What is the current travel advisory for Ethiopia?

Ethiopia is currently rated at 2,6 out of a possible 5.0. Collected from 7 official sources. We advise caution when travelling to Ethiopia.

Visiting the country Ethiopia is usually fine. The score is at 2,6 Just keep an eye open, obey local rules and you'll most likely be fine.

How many travel advisories do you know for Ethiopia?

We currently evaluate 11 official sources each morning. Today, we know of active advisories from 7 individual sources for Ethiopia.

What is the size of Ethiopia?

If you want to embed Ethiopia travel warning information into your website or application, check out these tools.

Get updates with RSS
If you want to get notified of changes of how safe Ethiopia is for travelling, you might want to throw our RSS feed into your reader. The feed will contain the most recent 10 changes in our risk assessment:
https://www.travel-advisory.info/rss
Widgets - Ready to use
You have a website about Ethiopia? Within minutes, you can implement advisory data into your wordpress, content management system or plain vanilla html website. Answer to questions like the following with an up to date advisory score. Learn about our travel widgets.
Data API
For use in your applications, app or tinker project. We provide a simple to use JSON/REST api. No registration required. No Charge. Learn about our travel api.
Other countries to explore
Most recent changes

2019-09-01:
Added timeline charts for risk level and number of advisories.